Bored Apes on the Rise

As you are likely already aware, I’m a big fan of the Bored Ape Yacht Club project. I’ve discussed it on many of my podcasts including my recent conversation with Gary Vaynerchuk.

If you are unaware, The Bored Ape Yacht Club (“BAYC”) is a collection of 10,000 incredibly well designed apes. The project went viral after two NFT influencers, Pranksy and J1mmy (an upcoming podcast guest if I can get him scheduled!) posted that they were jumping in and acquired a large portion of the supply. That happened one month ago.

While prices have been on the rise for a while things changed this weekend when a couple of NFT whales jumped in to buy up the floor (the cheapest apes available). All of a sudden the floor has gone from 0.35 ETH to 0.7 ETH.

As of this morning, the floor price has overtaken Meebits, the project that I have consistently bemoaned thanks to being down ~$6500 on my original investment.

I was fortunate to add a second ape to my portfolio the day before the Bored Ape surge occurred but wish I had a couple more.

Frankly, I’m not sure how much higher BAYC can go but the organizers of it have been providing an absolute masterclass in effectively running an NFT project.

Most significant is the fact that they are active in the project’s discord which contrasts with the LarvaLabs team (creators of Meebits) who have been notably absent.

BAYC recently announced a partnership with Sandbox (the virtual world game that I have a soon-to-be released podcast with the co-founder) to offer free virtual world avatars to everybody who owns an ape (similar to Meebits). As such, it wasn’t surprising when the apes rushed in to buy virtual land as part of Sandbox’s recent virtual land auction, creating a win/win for both organizations.

The team also has an upcoming feature called “breeding” in which your ape will grant you access to a derivative ape.

There was also a merch drop over the weekend and if you search on eBay for “BAYC” you’ll see that some of the items sold for as much as $12,000 (despite costing $35 to purchase). While I can’t advise you on what projects to get involved with, you can check out the cheapest apes for sale via this link.

Here’s my VR VC ape feeling right at home at the Rosewood Hotel on Sandhill Road. 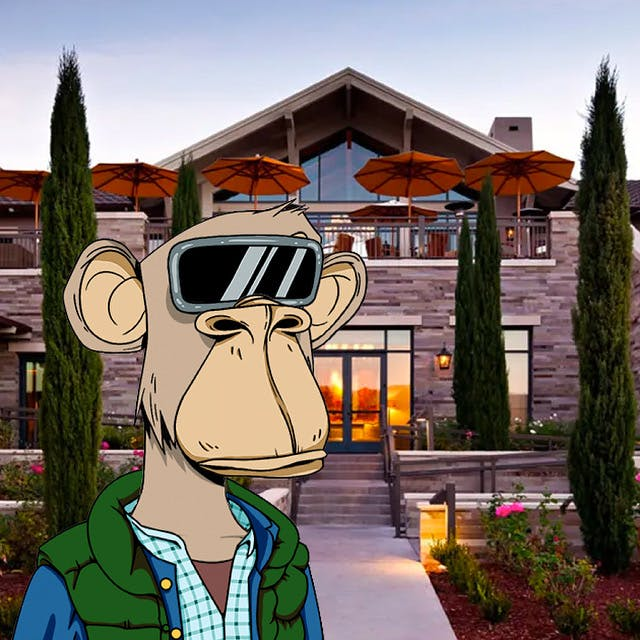 This week I’ll be hosting Flamingo DAO and Ben Mayor White (of Adidas) on the show. Neither will be on Clubhouse as they are both early morning interviews. As an aside, I’ve been hosting more episodes off of clubhouse and saving them for the actual release date. I’ll still be on Clubhouse but will likely limit the number of shows there moving forward.

This week I’ll also be publishing episodes with Mitchell Chan, PplPleasr, Ness Graphics, and Gary Vaynerchuk! Make sure to subscribe!