Most art collectors prefer the type you can see but up to 80 collectors are about to drop $1 million on an NFT you can’t even see. The project Digital Zones of Immaterial Pictorial Sensibility is a product of artist Mitchell Chan and was the third NFT project ever created.

Given that the project predates the ERC-721 format, instead using ERC-20, it’s not completely surprising that the project has attracted a discerning audience of NFT collectors. The story is also quite interesting…

In 2017, Chan had been spending time looking for new mediums when he came across Ethereum. It left him wondering if there were any art projects that provided a precedent for something which provided nothing but a receipt of validity. That’s when he came across an infamous project by artist Yves Klein who hosted a gallery in which there was literally nothing.

While some attendees were angry, there were others who were completely moved to tears. The art piece, Zone de Sensibilité Picturale Immatérielle, was one of many that force people to ask: “What is art?” Anybody who strolls through the galleries of a modern art museum is likely to ask the same thing.

From single colored canvases that are slightly askew, to single objects like a banana taped to the wall or placed on the floor. The emotions evoked in response to such ridiculous pieces are similar to those who walked through Klein’s gallery.

In the case of Klein, his work was an attempt to challenge the requirement of physical material in art as Chan articulates in his phenomenal essay which accompanies the project:

Through the artwork itself, an empty space that Klein claimed was imbued with the sensibility (but not the physical trace) of the colour blue, Klein explored the absolute limits of the relationship between experience and material. The Zones confer Klein’s total belief that an artistic experience can be created and communicated without employing any material whatsoever.

Through the exchange of these pieces, Klein was able to draw parallels between the immateriality of his “scandalous” artwork and the immateriality of traditional ideas of ownership. Klein distinguished between two related but fundamentally different types of ownership: the absolute ownership of the thing, and the legal ownership of the deed to the thing. In different terms, we could say he separated the ownership of spiritual use value and material exchange value. In Klein’s project, it is impossible for a collector to have both

It’s this decoupled ownership which literally defines NFTs. While there are NFTs which incorporate artwork into the actual contracts, they mostly just represent ownership of artwork which exists elsewhere.

In the case of Yves Klein’s work you can still purchase the artwork today. In other words, you have the option of purchasing literally nothing and you will receive a receipt for that purchase (sound familiar?). 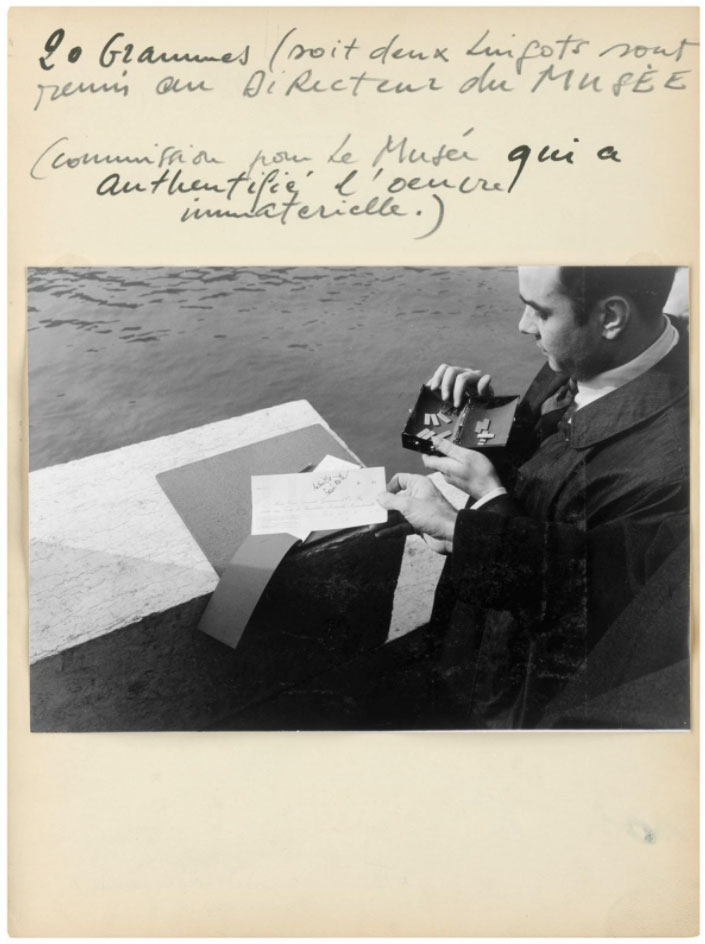 Transfer of Gold For A Receipt of the “artwork”

Above is a picture of part of the ceremony involved in transferring ownership of the work to Michael Blankfort in 1962 in exchange for pieces of gold. You can view pictures of the whole ceremony on the Yves Klein website.

The transaction not only involves the transfer of the receipt but the actual burning of the receipt and the throwing of a portion of the gold into the river. If you had been involved in this ritual, you cannot actually transfer ownership again however. Instead, “the immaterial pictorial sensitivity zone belongs to the buyer absolutely and intrinsically.”

As ridiculous as it sounds, the original artwork is now considered historic and Mitchell Chan’s interpretation of that artwork is absolutely brilliant.

You may be wondering, if the original artwork is no longer transferrable, how is Chan’s interpretation of the project valid? Shouldn’t all the NFTs be burned?

Well, Chan figured that out. In the initial iteration of the project, you would purchase a non-fungible token (despite it being ERC-20) and you could do two things. First, you could hold it perpetually. The second option was to perform the “ritual” process in which it was burnt forever and half of the purchase price was deducted from Chan’s wallet. By completing this process you would gain the “immaterial sensibility”.

In the new iteration (which is just a wrapper around the first one), there’s an actual picture associated with the NFT (as pictured below) which attempts to recreate the receipt initially used by Yves Klein.

At the moment, approximately 65% of the pieces in existence have now been sold. Once all are sold, the told revenue generated is now worth over $1 million. All new tokens begin at the price 3.2ETH or $12,480. You may be thinking “wow that is a lot of money to spend on nothing”. Such thinking would be rational.

However in the world of NFTs, selling nothing almost seems as compelling as a meaningless image. In fact, this set of nothing appears far more compelling. If you happen to be one of those exclusive collectors who has bought in to the story, Chan’s website has a tutorial on how to collect one of the remaining pieces of nothing.

If you’re interested in learning more about the significance of selling nothing, I highly recommend Chan’s video series, the first of which is embedded below.